While my relationship was rosy, the way people interpreted wasn't always kind. For a woman dating an out gay man, terms like "beard" and "fag hag" get thrown their way, and male partners don't have it easy either. Navigating an unexpected relationship in an circumstance is difficult, and feeling isolated by a community that once received me was particularly hard; I'm no stranger to comments from LGBT activists that heap scorn on couples with "passing privilege" who show up to Pride events. I don't understand this policing of who's allowed to turn out for an event about celebrating love and equality.

Everyone's gorgeous and friendly and supportive, but it doesn't take long to unearth some Tumblr post about how couples like us ought to stay locked up inside until the dull grey fog of heteronormativity has descended over the high street once again. I want for my partner to feel free to support me and my experiences; she has as much of a right to care about the LGBT movement as anyone else. I ditched Facebook a long time ago, partly because of the mudslinging that took place when we made our relationship "Facebook official".

For example, I was told by one gay woman that it "looks bad for the community", and "implies that sexuality is a choice you can go back on". I'd been involved in LGBT activism, but my experience with responses from members of the community to my new relationship discouraged me from returning. Those comments focused, without exception, on how it looked from an outsider's perspective.

Basically, if you can, hire a PR team to handle it for you. If you can't, good luck; you'll grow a thick skin pretty quickly. People love binary oppositions, and when you don't fit into the boxes that make sense to them, they may express fear or distrust. My girlfriend was as supportive as it's possible to be and had conversations with her friends and family about the situation ahead of time, and this made it so much easier for all of us to break the ice and get to know each other properly. But there were still a few people out there who thought I needed to prove myself. My partner and I got repeated lectures about how untrustworthy I was, the most memorable soundbite being: I got so angry about reactions like these, and there were a few occasions where I lost my cool and said something I regretted.

She, patient as always, helped me to realise that we didn't deserve the kind of reactions we were getting. Naturally, our social horizons changed a little bit. We kept meeting up with the people who trusted us, and we saw a lot less of those who didn't. Neither of us have any regrets about that: After all, all we did was tell the truth, and most people took our honesty really well.

People love stuffing things into boxes, but after all those conversations about the fabric of gender and sexual identity, you'll never fit anything into a box again. For instance, we've been deliberating over whose second name to take when we get married.

I don't like the tradition that we default to my name, but she says it's not about that: She just likes the way her name sounds with my bizarre double-barrelled surname. But what would our kids do when they get married? They'd be in this position again, which just passes the problem on. Mixed-sex marriages have a lot of traditions like that, and they can cause a few headaches when you've grown up with no desire to follow any of them well, except the "getting married" part.

But for the most part, gender and sex have little to do with the kind of happiness we have. We're a lot like other couples in their early twenties, right down to the Chinese food boxes piling up on the kitchen counter, hazy plans for the future, and Netflix marathons. We worry about council tax and openly struggle with the feeling that we're still kids pretending to be adults. Our years together have been the best of my life; on that note, we've been a part of each other's lives for nearly 10 years, shaping each other into the people we are today.

And all of this has happened regardless of gender identities and body parts. So long as you take time to figure out who you are, you're probably doing the right thing. Sounds obvious, but it took me a while to come to terms with that. I spent years trying to figure out what I wanted, going through huge internal transformations and learning to listen to myself all over again. It was rough at times, but I came out of it much happier than I was before, and with a far better understanding of my own mind. 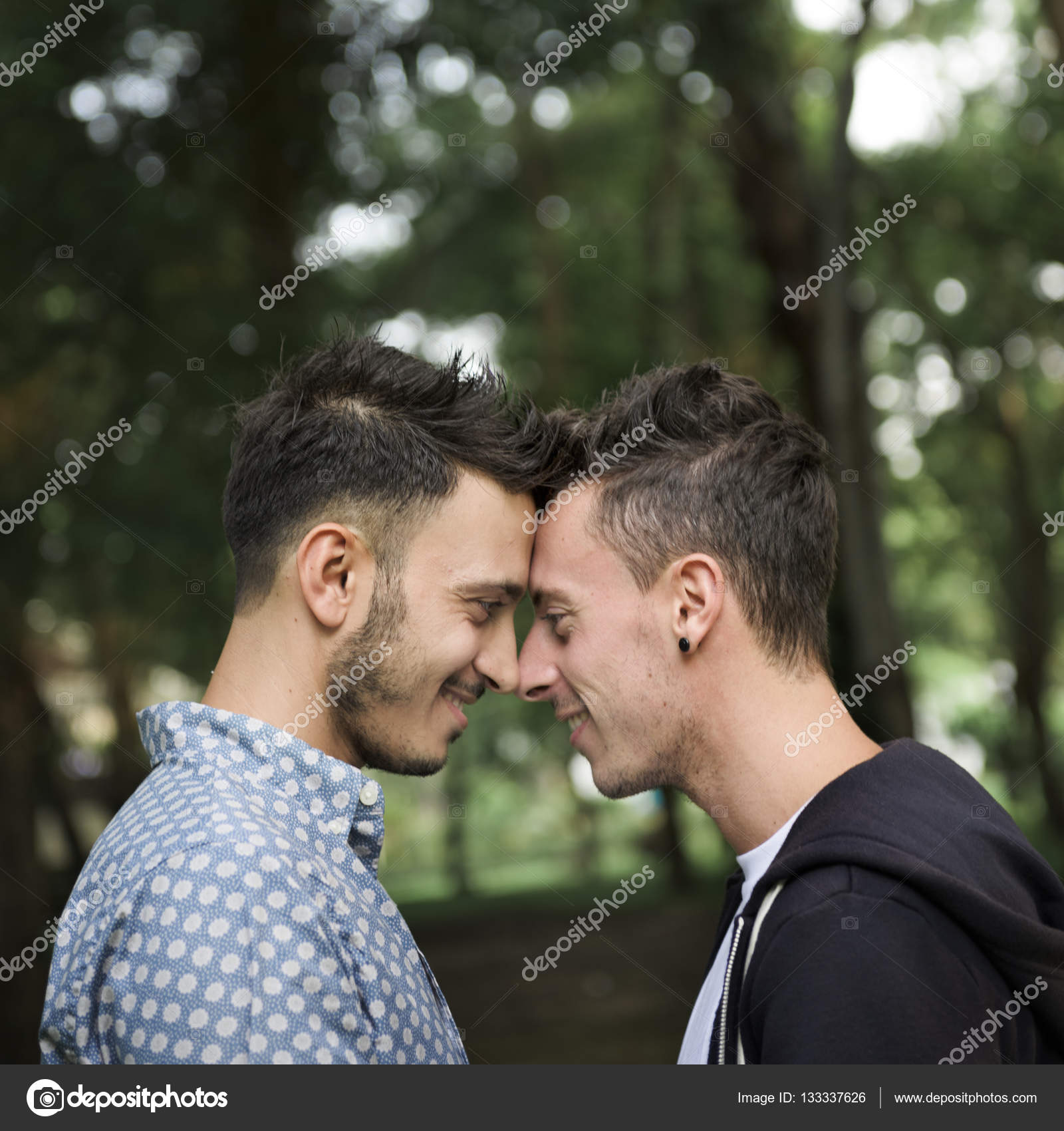 When you're asking questions of your own identity, you're the best judge. Don't let someone else's reaction guide you. Most people learn to acclimatise themselves to a new situation — and they're likely to be the ones closest to you. It was important to me to remember that it's not up to them to decide who I have the right to be with in the first place. Really, it's all about being content with the fact that I made the right call for myself.

I'm fulfilled, and that's the most important thing. The people who matter will understand in the end. Our culture's ideas about sexuality are changing all the time. According to Peter Tatchell, who has been campaigning for LGBT rights for longer than I've been alive, the future of sexuality is not about gay or straight at all. There's been a lot of debate about why, but I wonder if it's because people are beginning to question whether labels are really the best way to talk about their flexible sexual identities.

If it's true that the media holds a mirror up to society, maybe society is finally gearing up for an honest discussion about all this. Writers have been aware of this paradigm shift for some time. Tatchell wrote that article in ; Orange Is the New Black was released the following year; The Kids Are All Right discussed the nature of sexuality in similar terms back in There are many, many more examples, but my favourite quote on the subject comes from the adaptation of Trainspotting:.

As a fresher at university, Robin, then 18, fell into a relationship with Dom, Says Robin: He absolutely had per cent control over things; the code of conduct imposed on us was coming from him, not me. Robin decided he would come out, in the hope it would show Dom that it didn't have to be a nightmare. Simon was 17 when his hitherto straight best friend made a move on him.

He would always tell me he wasn't like me, and couldn't be, because he 'had his whole future ahead of him'. The idea that my future was irrelevant and that admitting he was with me would ruin his made me feel worthless and I ended up battling depression for years. Gay men aren't toys to be practised on. Bisexuality was often the only concession to less binary labels, but is and was often a source of derision among straight and gay people alike, characterised by accusations of greed or indecision.

The closest anyone got for many years was the advent of metrosexuals — basically straight men who used moisturiser and took longer than five minutes to get ready in the morning — and drunk straight women getting off with each other for a dare. And even these were very much about straight people play-acting than any serious comment on evolving sexuality. Everybody else had to stay in lane, their labels hanging over them.

A sign things could be changing, for the better, are men who are comfortable with their status as a man who sleeps with men, and refuse to be bound by labels. Years after his straight-guy experience at uni, Robin somehow once again found himself in the middle of another heterosexual man's coming-out story.

At first Robin assumed this was just an ego boost, but when Luke battled depression and none of his female flings were on the scene, Robin found himself as primary source of care and comfort, and feelings grew from there.


And I thought that was adorable, and sensible, and kind of romantic. While some men may both have the strength of character and also the front — and it takes plenty of that, be under no illusion — to reject these labels and still be open, it should be said that labels can sometimes facilitate this. All the time, and not too far away from us, LGBT people are fighting for the right to call themselves LGBT, but for your right to define yourself however you choose — gay, straight, fluid, curious.

Just as out gay men have a duty to protect themselves from others forcing their own will upon them, maybe those refusing to conform should acknowledge their sacrifice and honour them by supporting the gay and bi brothers who keep their secrets. In private, in public, wherever. Meet the most advance sex robots ever and the men who fall in love with them.